Sights of our city 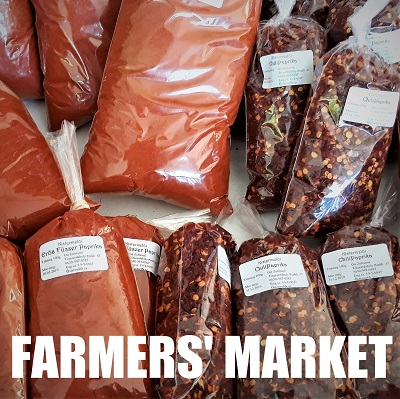 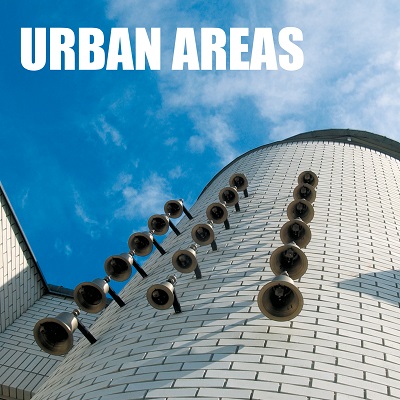 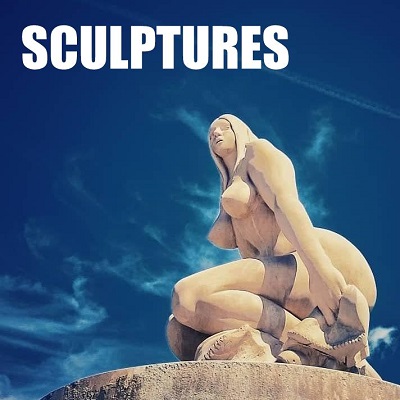 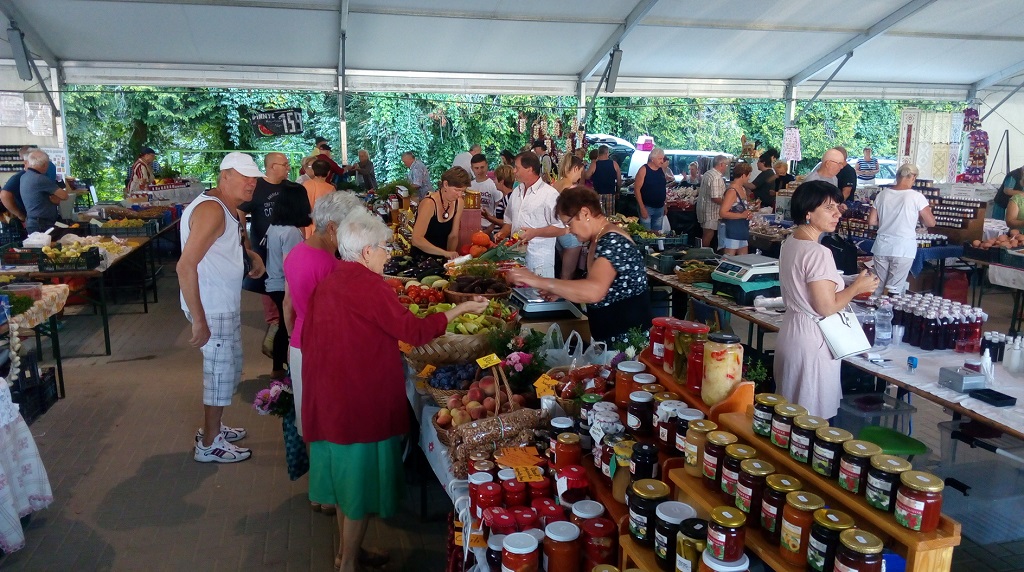 Evoking the old times, the area behind the large car park is getting full of vendors on Tuesdays, Thursdays and Saturdays.  Occasionally visitors can meet the products of honey producers, pickles and juice makers, cheese and vegetable vendors accompanied by traditional Transylvanian music.

Fresh bread, sausages, home-made cakes and cow milk can be even tasted before purchasing them. Beside the fine goods, craftsmen sell their wares. Pottery, baskets or even hand-made soaps can be bought on the spot. The farmers’ market of Hévíz offers high-quality and chemical-free products for the conscious customers. Shopping here will not only support the local farmers, but it is a decision for healthy living.

The 800 vendors, who offer their product for sale from time to time, have already decided for the Farmers’ market of Hévíz. Visit us, come and see for yourself! 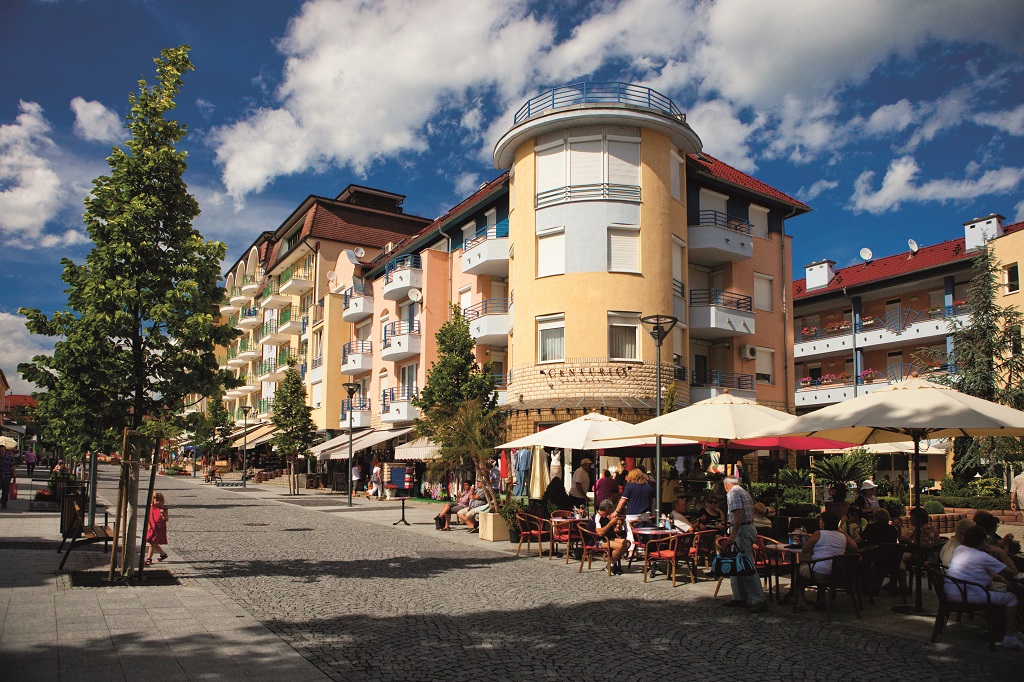 The entire length of Rákóczi Street is a pedestrian zone. This street connects Széchenyi Street (which is the main street) with Dr. Schulhof Vilmos Promenade.

The Tourinform Office is located at the beginning of Rákóczi Street. If you are coming from Széchenyi Street you will find the Office is on your right. The tourist information office is open all year round and offers programs in the area and tourist information for the visitors. The office also provides internet facilities and bicycle rental services.

If you carry on down Rákóczi Street towards the thermal bath it is worth looking at the buildings hiding behind the trees among boutiques, cafeterias and ice cream parlours. The pedestrian zone is bordered by villas built in the 1920s, which are nowadays - after significant restoration works-  accommodate apartments and cafeterias.

Fontana Motion Picture Theatre (Fontana Filmszínház) is located half way down Rákóczi Street and opposite the id. Dr. Moll Károly Square with a fountain and the full size bronze statue of Károly Moll. Károly Moll is the „father” of weight bath, which he developed in Hévíz in the 1950s.

The building of the Indoor bath is situated at the end of the street. The Therapeutic Centre (Terápiás Centrum) was handed over in 1968, which is nick-named by the locals as the winter bath. It was reconstructed in 2004 and there are plans to extend and further develop the building in the near future. We can view the Pantheon on the external wall of the building, and in the foyer the Jupiter stone is exhibited, which proves that people were living in this area already 2000 years ago.

Building of the City-hall

The new building of the city-hall is located at the Kossuth Lajos street, it was constructed between 1998 and 1999 on the place of the former town-house. It was inaugurated on September 9th, 1999.

The building is one of the important eyemarks of Heviz; it was built in 1950, and in 1997 the renovation was started behind the former town-hall. On January 31st, 1998 Bertalan Farkas, the first astronaut of Hungary and the mayor laid the foundation stone. The plans were prepared by Laszlo Benczur and Peter Takacs, under the co-ordination of Peter Reinholz Kossuth Prize-winning architect. The Building-trade Company of Zala county was implementing it. The useful floor-space of the building is 3367 m2.

The office of the local government is located in the building, its employees receive the clients every working day. The southern side wing includes a conference and theatre hall for 200 persons, this facility serves not only the meetings of the city, but all other scientific and cultural events.

The buildings located next to the main car park in Széchenyi Street are called „the row of cafeterias”.
If you approach Hévíz from the direction of Lake Balaton, turn right at the first crossing to Széchenyi Street, and after passing the forest belt you can already see the cafeterias.

If you fancy a tasty “lángos” (fried dough) or a grilled sausage, here you can find what you are looking for from the wide choice of delicacies offered by the best buffets. If you prefer a traditional dinner or lunch, don’t hesitate to treat yourself in one of the many restaurants of town.

You can purchase Hévíz gifts and the must have swimming aid during your holiday at the gift shops located in between the cafeterias.

Life music and entertainment programmes are also offered to the tourists in the evenings.

The Egregy part of Hévíz town is famous for its gastronomic delicacies. From downtown you can access the wine cellars in 25 minutes on foot. On your way you will pass Jesus’ Heart Church (Jézus szíve templom) at the end of Zrínyi Street or you can visit the Roman excavation site at the end of Attila Street.

In the evenings the wine cellars and restaurants built in between the rows of vines are magnets for the guests of the town. This is a great place for the guests - exhausted after bathing – to charge up with a nice dinner or enjoy a wine tasting event while listening to live music. Restaurants offer not only traditional Hungarian specialties, but also international dishes on their open air terraces or in the cosy wine cellars.

If you carry on down Dombföldi Street among the wine cellars, you can reach the Arpadian Age Church, which is one the most beautiful built cultural heritage of Hévíz. 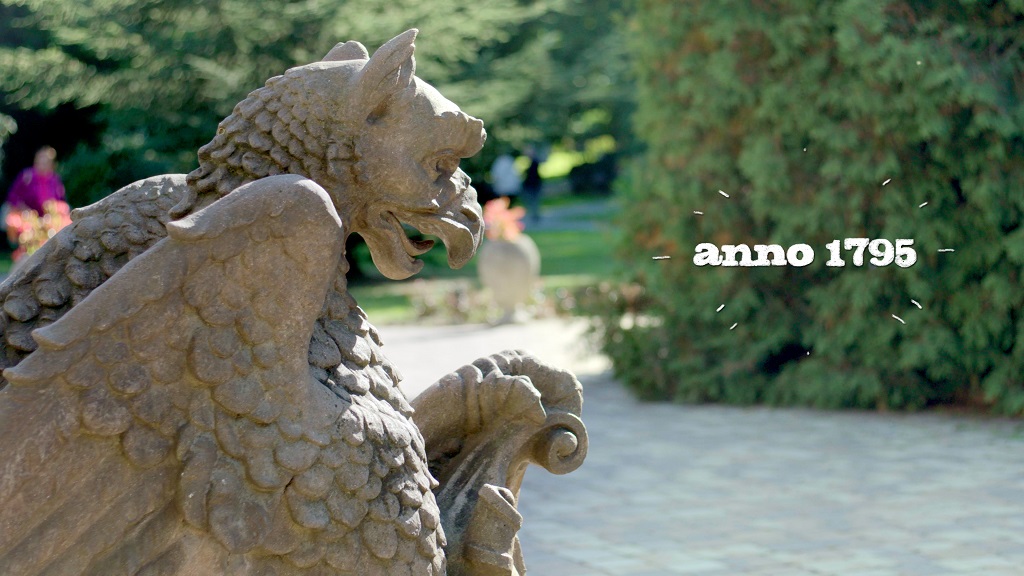 The cherubs served the gods in the mythology of the ancient Semite folks. They stood in front of the gates and kept away the demons. Their images were engraved in the stones of kings’ palace gates or church gates, most likely that is why the Festetics family had them made as well.

According to the legend, if someone walks through between two cherubs without love in the heart, the cherubs start speaking. According to another storyteller not the cherubs but the copper rooster placed on one of the towers of the baths starts speaking, if someone leaves the town without love. But there has never been a precedent for this. 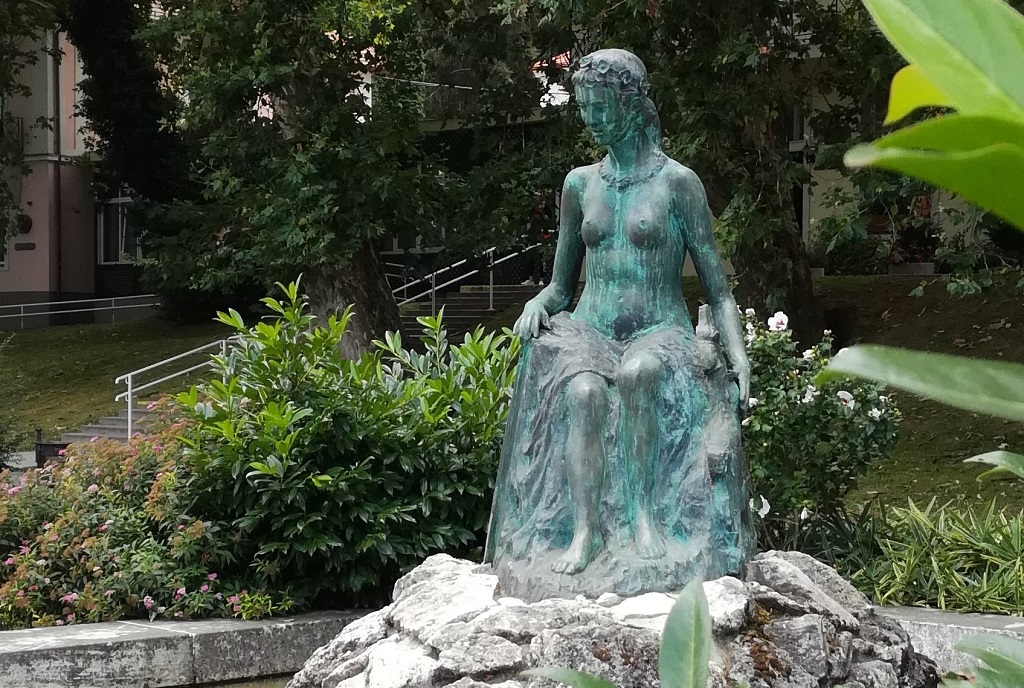 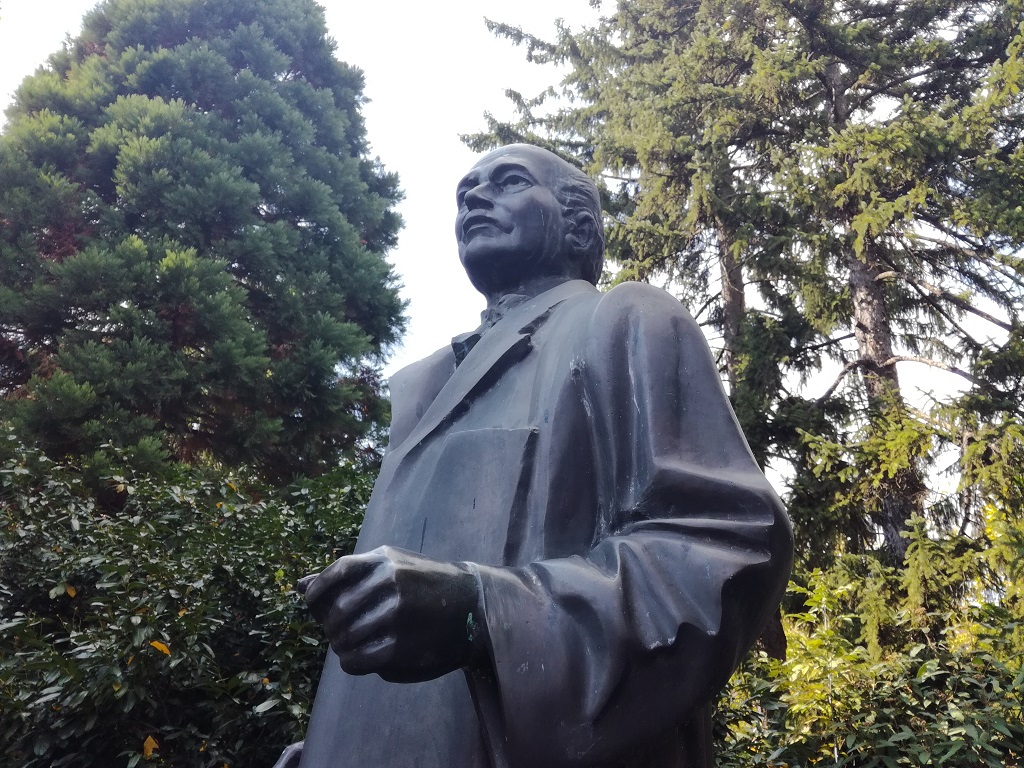 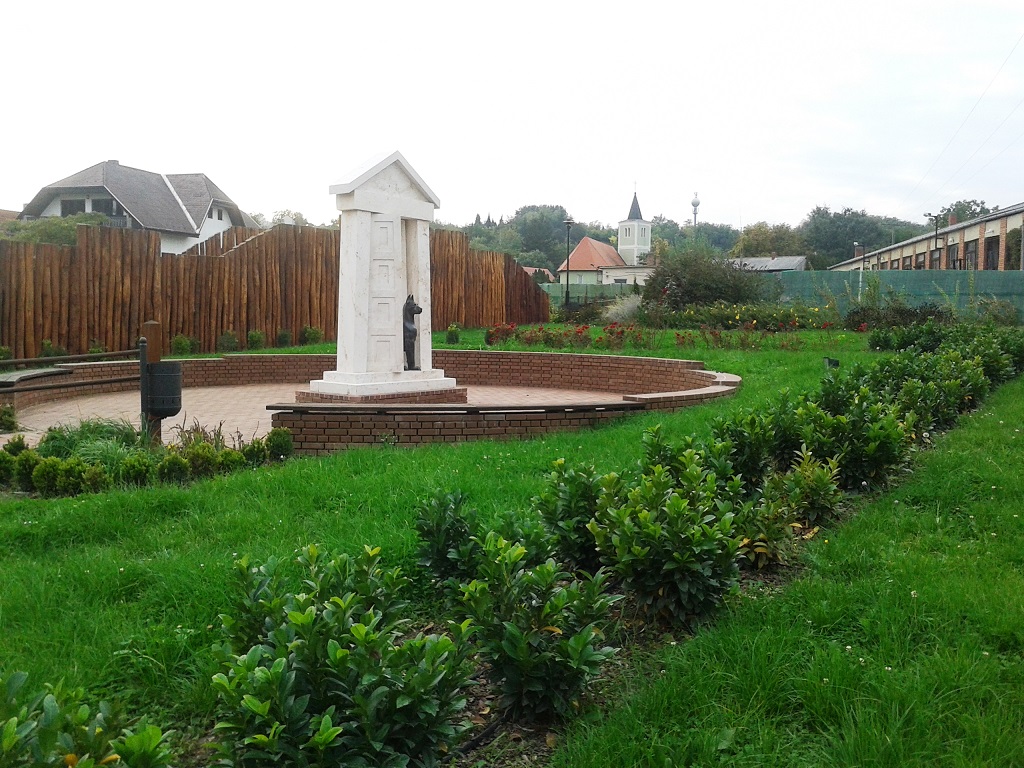 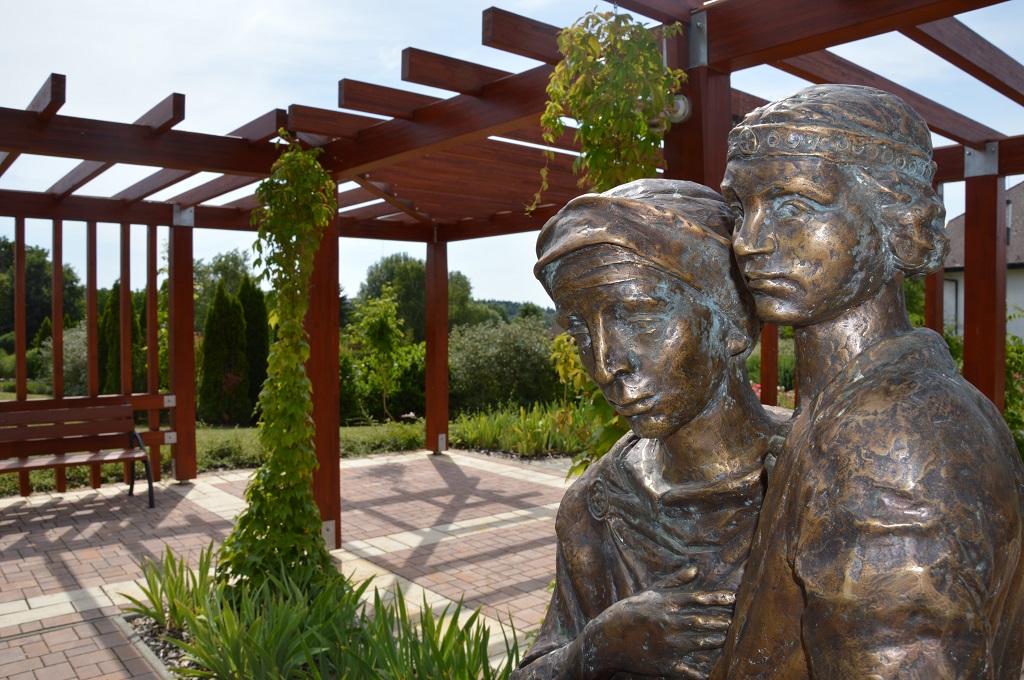 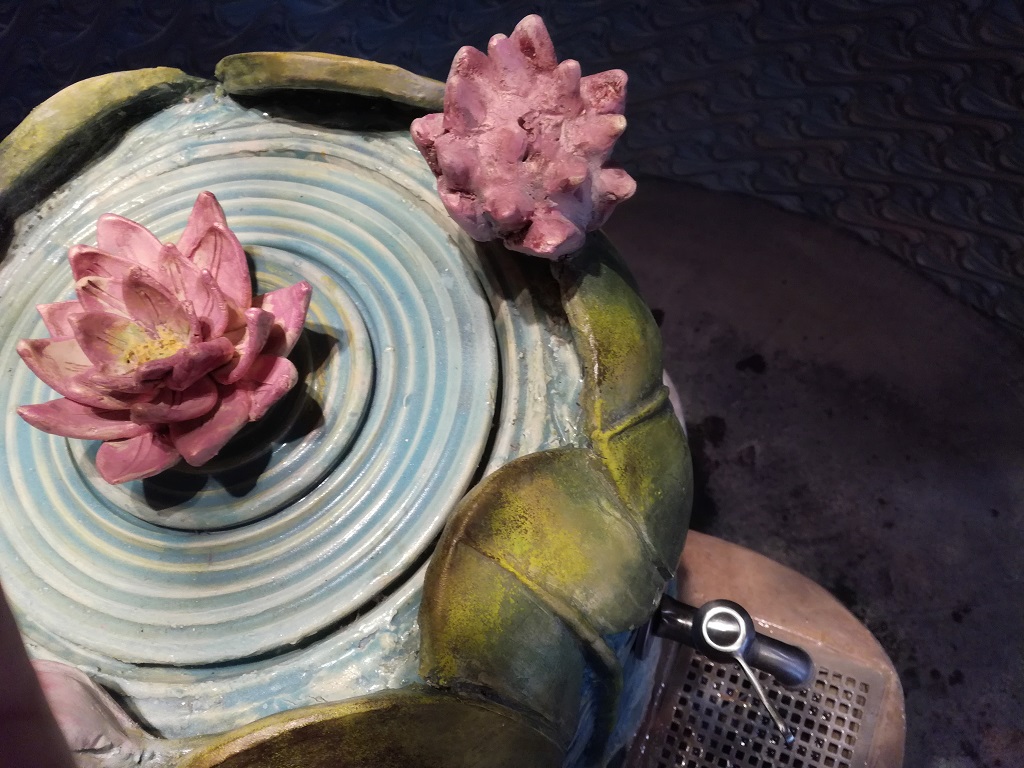 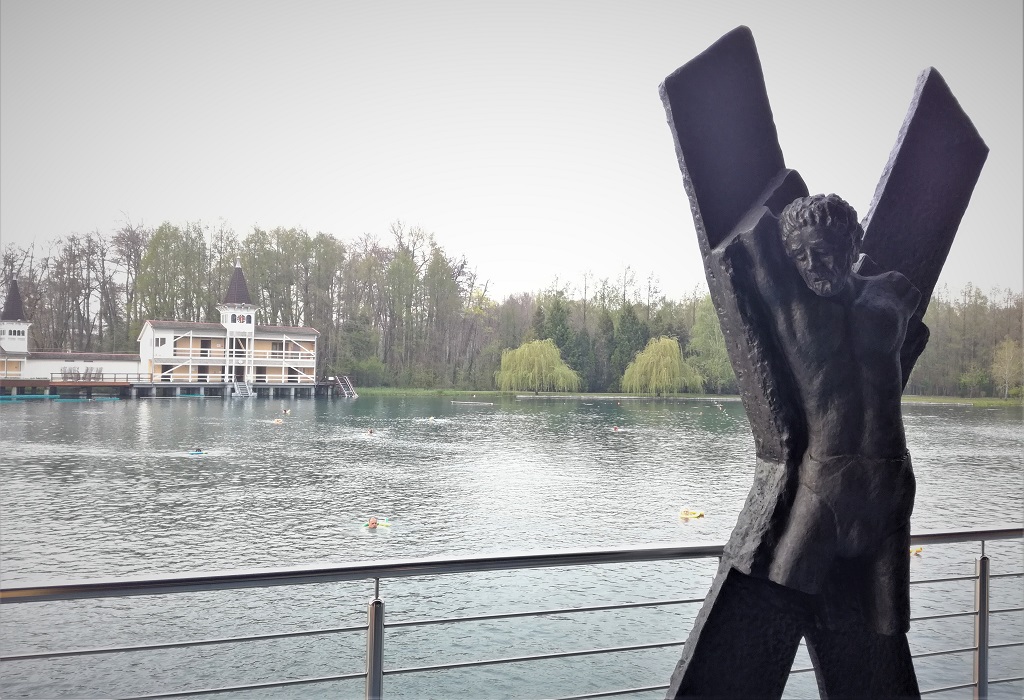 There are several artworks in the public places of the town; you can see a statue or sculpture nearly in every street, most of them were created by the famous sculptor, László Marton. In the park of the Lake Spa, known as Hévíz Statue Park, there is a group of statues including the busts of three outstanding figures of Hungarian literature: bust of Zsigmond Móricz (created by László Kutas), Mihály Csokonai Vitéz ( by József Rátonyi) and Dániel Berzsenyi (by Tibor Riger).

You can see 13 memorial tablets placed on the wall of the Winter Spa to commemorate the most famous visitors of the Spa.