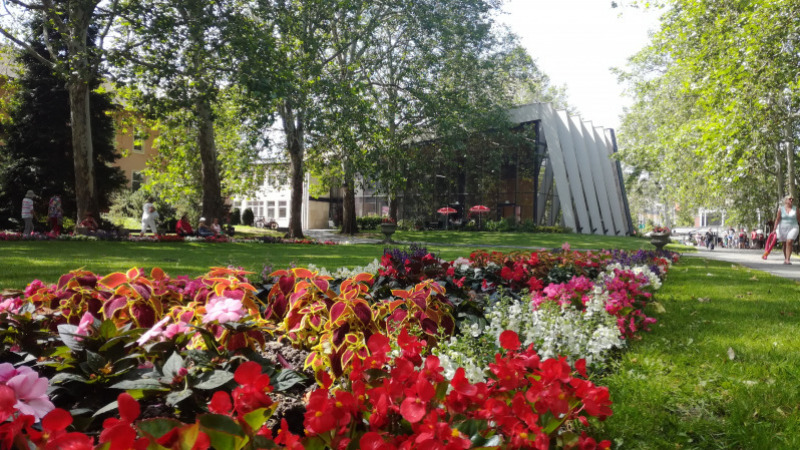 New investments are taking place at many locations of the Lake Balaton Touristic Region. The investments and developments are aiming locations which are in connection with the Festetics Family of Keszthely. Thanks to the project, a cultural route is being created which will not only introduce the region but will also focus on the heritage of the Festetics. Regarding Hévíz, the main focus of the project is to completely renew the promenade around the lake.

Since the investments are taking place in a nature reserve, careful planning preceded the beginning of the work. The plan had reached its final form with the inclusion of conservationist experts and with competent authority approval. The plan was also examined in accordance with the environmental action program defined by the European Union. As a result, the protection of the flora and fauna will be extremely important during the execution of the plan. For instance, the first step of the building process will take place outside of the growing season so the works wouldn’t disturb the hatching and nursing season of the birds.

To preserve the character and the natural value of the park, a certain part of the tree and scrog stock will be renewed as well. The majority of the plants to be cut (63 scrogs and trees) are not native. To their stead, 12,500 new plants will be planted, focusing on the following:

The first points to consider during the choosing of the new plants were the natural value, décor and variety. It was highly important to choose new plants which would bloom over more seasons and that the different structures and foliage would be appealing to the scene. Since the park is visited all year long, a lot of evergreens were also chosen.

During the 12-month development, new attractions and services will provide convenience for the guests. The new attractions, promenades, photo points, the music pavilion and the pergola will revive a historical atmosphere. The fountains, the lights, the irrigation system and the rainwater channels will be also renovated.

Partial roadblocks are to be expected during the works, however, the renovation won’t disturb the services of the Lake or the Saint Andrews Rheumatological Hospital.