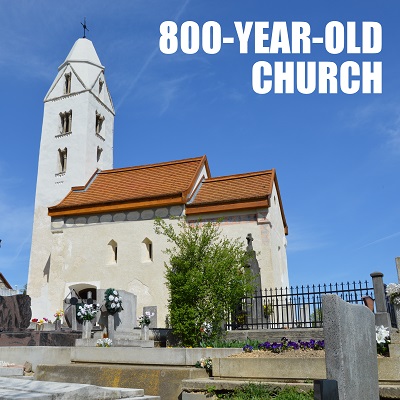 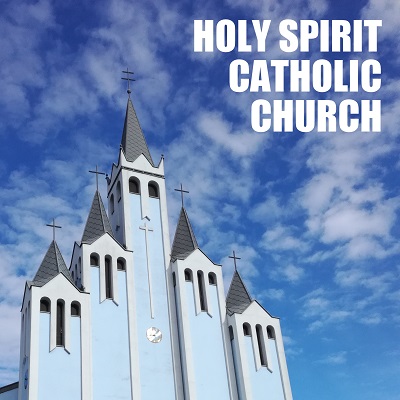 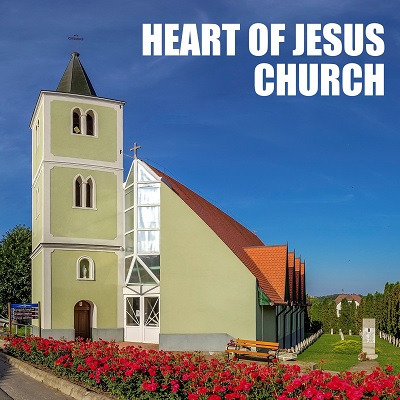 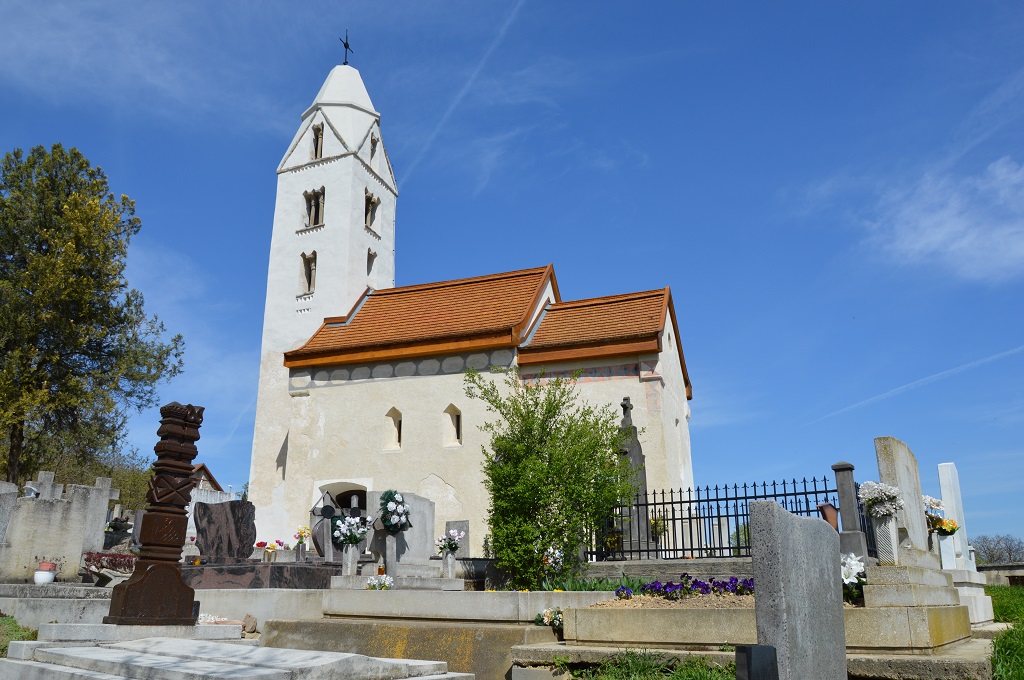 The Egregy part of the town called Hévíz used to be a medieval village, which has been destroyed during the Turkish occupation and has been rebuilt by German settlers in the 17th century. The traditions of vine-growing are preserved by the local oenologists and inns. One of the pearls of the town, the ancient monument church built in the 13th century is located in the Egregy part of the town. The church is surrounded by a graveyard. From the top of the hills there is a wonderful view to see.

The exact date of the construction of the church is unknown; presumably it was built in the middle of the 13th century. Written records mention it for the first time in 1341. The building was heavily damaged during the 16-17th century, in the baroque times it has been renovated in 1731. Luckily only the parts that absolutely needed action were involved in the renovation, therefore, the medieval form of the church remained. The results of this renovation included the internal and the external decorative paintings, heightening of the nef, and the missing arches have been replaced, too. The first patron of the church was St. Catherine of Alexandria. After the renovation the church has been consecrated again, and the new saint patron was St. Magdalena. Then the church has been subject to renovations repeatedly: in 1860, in 1912, between 1964 and 1965, in 1990, 1991 and in 2015.

There is an opened baroque door on the southern side. The arching of the tower has been renewed in the 18th century, and the quadrangular nef adjoins it. The only decorative element adding space to the interior of the church is the row of chambers in the northern wall.

It is important to pay attention to the paintings on the wall of the church. These are not of medieval origin, but are the clear evidence of the architectural enrichment of the church. It reflects the due respect of the folk art treasure forms. Inside the building there are the fragments of a baptising pool from the Roman age, and a consecrated cross from the medieval age.

The church of Egregy is one of the three churches from the Arpadian age left entire in the area of Lake Balaton.

The structure and the space of the orientated church are clear-cut, it has a straight sanctuary and a single nef. The tower has three floors of rich formation, with double and triple windows. The tower is covered by an octagonal helmet-shaped roof reinforced by eight quarter-timbers.

The foundations preserved the forms used for building from wood. The painted decorations and the scratched forms remained on the external surfaces. 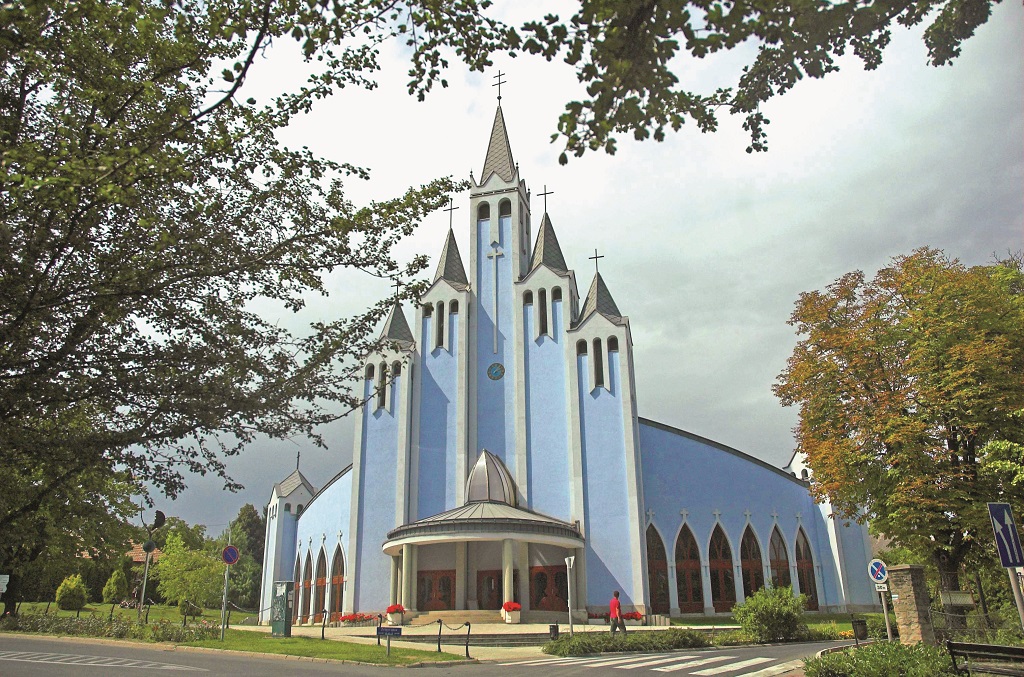 The Holy Spirit Catholic Church is the largest church of Hévíz. Its seating capacity is about 1000. The foundation stone of the church was laid by Jozsef Szendi then bishop in May 1996.
Its GPS co-ordinates are the following: N 46° 47' 21.85", E 17° 11' 06.04"
The church was built based on the plans of Janos Bocskai architect. Due to the support of the town and the population it has been completed in three years. The seven sky-high towers serve as a guide for the visitors of the town. The seven towers are the symbols of the seven gifts of the Holy Spirit.

On September 9th, 1999 it has been consecrated together with the Town Hall by Jozsef Szendi retired bishop.

The interior of the church is alloying modern architecture and tradition enhanced mainly by the nice wooden panels. Its excellent acoustics makes it a suitable scene for giving organ concerts, too. The colourful windows with their Gothic-like forms are the hand-made products of Endre Simon artist from Heviz. The torso cross on the wall of the sanctuary is a 200 years old art treasure that has been granted to the church and has been restored by Gyula Karolyi restorer and painter.

The bronze statue of Christ on the left side of the altar was created by Laszlo Marton. He is also the composer of the bronze statue called the Dowager of the Hungarians standing on the right side and wearing the Hungarian Crown. The lustre glaze pictures on the walls were made by Laszlo Morvay. The wooden structure was built by Tibor Kováts and the wooden works of the interior were produced by Andras Hegedus.

There are four bells in the towers. In the garden of the church and in its neighbourhood there are several statues and reliefs.

Due to static reasons there was no bell placed in the highest tower. In the tower on the left there are two bells ringing, one of those have been founded by Dr. Bela Horvath and his family to pay homage to Saint Peter, the another was moved here from the old church. One of the bells in the right tower have been founded to do homage to Saint Paul and the costs were covered by the widow of Imre Varga, its another bell is again from the old church. The Calvinist church was constructed between 1995 and 1998 based on the 1941 plans of Balint Szeghalmy architect from Nagyvarad. The marble decorations of the building are evocating of the Hungarian Calvinist churches of Transylvania. When creating the interior the Calvinist traditions were followed and it has remarkable woodworks.

The church is used both by the Calvinist and the Lutheran denominations for servicing and meetings. Indeed only the minority of the population of the town is Calvinist or evangelical, but every year there are thousands of visitors belonging to these churches arrive here from Hungary and from abroad. The Calvinist from Heviz used to have no church, their meetings were held in houses and in the Community Centre of the Spa-Hospital. The evangelists used the small room of the movie theatre, then the lobby of Hotel Alba and the Community Centre of the hospital. In 1994 the city council made a donation of this piece of land to the denominations. It was again the local government supporting the construction, then a funding was started in order to cover the remaining costs of the works started in 1995.

The foundation stone of the Calvinist church was laid on June 21st, 1997. The finished church building was consecrated by Dr. Bela Harmati evangelist bishop and Dr. Mihaly Markus Calvinist bishop.

Karoly Borsos and his family made the donation of the bell located under the opened arch of the tower to the church. 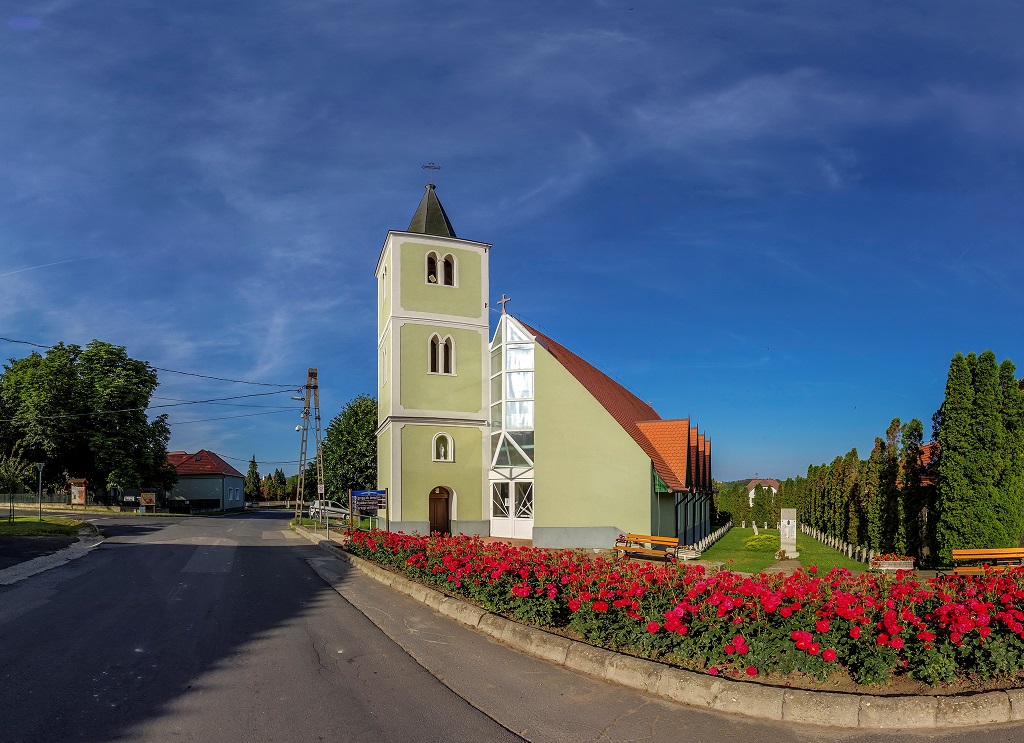 The Heart of Jesus church is located in the Egregy part of the town. It consists of two parts constructed in different ages. Close to the church there are building ruins left from the Roman age, the excavation was brought to a close in 2004.
Its GPS co-ordinates are the following: N 46° 48' 07.28" , E 17° 11' 20,94”

The church was built based on the plans of Janos Bocskai architect. The belfry was built at the beginning of the 20th century, while the nef was completed in 1994-1995. The belfry built in 1905 had two floors, but in 1937 a third floor was added. The tower built in Roman style has twin windows and includes a small and a large bell. The small bell has been founded to do homage to Maria Magdalena in 1905. In 1937 the large bell was founded upon the order of Egregy village to do homage to those who died in the King’s service. To pay homage to those 16 people lost in World War I there is a table made of stone in the middle of the cope and the names are listed on this. In commemoration of them again there were 16 trees planted, together with grave-markers having each name, date of birth and birth of death carved into those. There are only 6 trees alive as of today. To pay homage also to those who died in World War II there was a memorial tablet placed into the wall of the belfry, including the names of the young people from Egregy who died. Later the tablet has been moved to the graveyard.

In 1994 the construction of the church nef started in accordance with the plans of Janos Bocskai. Then it has been consecrated by Dr. Gaspar Ladocsi major-general, chaplain general to the forces on April 22nd, 1995.

The church is also called Fradi church, due the significant support provided by Sport Club of Ferencvaros (Fradi) for the construction. The white and green colours of the interior and the small memorial corner reflect the ties with the club.

END_OF_DOCUMENT_TOKEN_TO_BE_REPLACED 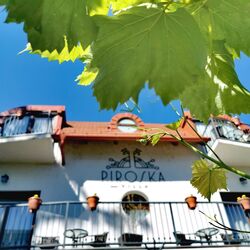